So, tomorrow then... what do we do tomorrow?

Editing A Balkan Journey was a privilege and a bittersweet experience. After two months spent making friends in Bosnia and Herzegovina – working as an intern at the Post Conflict Research Center (PCRC) – I found that I recognised all too well the narratives woven through Chris’ stories and John’s essays.  Narratives of a peace with strings attached, of dwindling opportunity and mass emigration.

These same themes reverberate through my life experience as a Brit of Syrian/Lebanese origin. I was lucky to be born here in the UK, but these narratives resonate. Along with this, tracing the historical ties between the Levant and BiH, as well as the similarities in contemporary history, politics and economics, can be even more revealing.  We see bloody internecine wars in their recent histories, power-sharing political set-ups of one sort or other, and high youth unemployment levels.

Both countries also have very highly educated youth, without the opportunities to match.  And, when you are a highly educated young person with a hypothetical but elusive career ahead of you, the only viable life choice can sometimes be to leave behind everything you know and love in search of possible hope, and probable precarity.

It is not about riches, it never has been. But simply the opportunity of finding a job that in some way matches your qualifications. Or the small safety net afforded by social welfare, which might allow you to pursue your entrepreneurial or artistic idea. These young people find themselves in a position where home no longer equals hope. What it becomes is, as one news anchor recently labelled Lebanon, a “graveyard for dreams”.

For Nikola, an engineering student I met in Mostar, applying for a fully-funded post-graduate degree in Germany represents the only hope of pursuing a viable career. He told me that even that option was a slim possibility.  He needed excellent grades but was finding it hard to motivate himself to study.

A lack of possible employment in one’s near or distant future is no small thing. It is crushing. Pile on top of that the potential hoops one has to jump through – work permits, applying for residency – and no wonder his motivation is fast dissipating.

Even more so, the young people I know know that people their age elsewhere do have some hope ahead of them.  They know that there are well-paid jobs for which they are qualified. Or even just jobs to apply for in the first place.  Other places where they would have some chance of progressing, rather than languishing in a job for which they are wildly overqualified.

My friends in both places all feel a heavy sense of disappointment and resignation. A lot of the time this is related to entrenched corruption, often of the very insidious political kind. I was in Sarajevo when the horrific explosion occurred in Beirut this summer – a city that a large part of my family calls home.  The almost predictable but nevertheless enraging criminal negligence displayed on the part of those in power is the tip of the colossal corruption iceberg that is Lebanon.  It is corruption that caused the death and destruction, and corruption that has left so many still homeless and helpless in its wake.

The physically and psychologically destructive effects of cronyism, clientelism and lack of accountability, to name a few, mean that, in both countries, most young people do “just want to leave”.

In BiH, a theme that consistently peppers any conversation about jobs, careers or the future in general is the need to be a member of “the party”.

My friend Vali – multilingual and studying international relations in Italy – aspires to a career in diplomacy. We are both postgrad students, so when the inevitable moment arrives in any conversation when we turn to the daunting topic of “what next?”, she reminds me that her hopes of any career in BiH are slim. “If you want a job in foreign relations, you have to join the party,” she tells me with resignation.

“The party” is of course whichever one of the three leading ethno-national parties matches your “identity” (the one prescribed by the electoral register that is).  I am told again and again that if you want any sort of secure job you must align yourself.

This political structure of clientelism, protectionism, low- and high-level corruption, and sectarian party politics, contributes to the stifling atmosphere in which these youth find themselves, not to mention its direct effect on economic stagnation.  And this is not unrelated to the fact that, in BiH as in Lebanon, not much has changed politically since the ends of the respective wars:  the same faces, the same parties, the same sexagenarian politicians.

This has been the situation in BiH for the past twenty-five years – since the signing of the Dayton Peace Agreement in 1995 – which is the entire lifetime of most of these young people (and almost my whole lifetime).  The same goes for Lebanon, whose war ended in 1989 with the signing of the Ta’if Agreement.  In both cases, the strict and somewhat complicated power-sharing structures implemented in the agreements helped end violent conflict, but many have argued that they also entrenched sectarianism and ethno-nationalism, and generally fossilised politics.

So, faced with all of this, it is no wonder that so many take the enormous yet inevitable decision to pack up and leave. To follow that little glimmer of light at the end of the emigration tunnel.

As for the ones who are lucky enough to make it out, it never stops being a painful decision. Vicariously suffering the pain of your friends and family, your loved ones ‘back home’, never gets easy.  My friend Lara lives and works in London, whilst almost her entire secondary school cohort remained in her hometown of Sidon, Lebanon. “My friends back home have all been jobless for 5 years and I’m here complaining about my boss, about doing work that doesn’t feel ‘meaningful’.”

Despite the bleak outlook – or perhaps because of it – there is not a single young person I have met, not a single friend from either place who does not face it all with a wickedly dark sense of humour. Humour helps you cope, and it brings people together, but I have found that it can also deliver some important truths from unexpected places.

In my last week in Sarajevo, I too, like Chris, went and paid a visit to the statue of Tito at the old barracks (now university campus).  And I was not alone – Luna, my Croatian friend and fellow intern, came too.  As we marched up Titova street we joked about how we were on our way to pay homage, to pay our respects to the man who brought ‘Brotherhood and Unity’ to this land.

The statue is impressive. You cannot help but be struck by the powerful, graceful pose and pensive, determined expression. We took our time and some excellent photos.  In one of the photos, Luna is curtsying to the statue – jokingly, but also sort-of seriously.  In fact, for a daughter of Yugoslavs who herself was born into post-war Croatia, the figure of Tito encapsulates many important ideas, truths and, I think, paradoxically, some hope.  It does not surprise me at all therefore that the figure of Tito emerges out of Chris’ stories too as a figure of hope.

This ‘future nostalgia’ (not a Dua Lipa reference), in which we are also seeing Lebanese youth romantically referencing the 60’s and 70’s pre-war ‘heyday’ of Beirut, often depicts a glamourous past of freedom and hope. Humour and nostalgia for a glorified past might indeed be one way that’s helping young people deal with the fraught prospect of their futures.  Meanwhile, the inevitable path to emigration one way or another simply looms larger and larger.

Yet, hope does not only bloom out of statues, old photographs, humour and nostalgia. I see hope in the warmth and genuine care that my friends continue to have for their homelands. Whether they end up forming the ever-growing diasporas or (try to) shape the future from home, the relationship between diaspora and ‘back home’ is one to be cultivated with care and attention. There are examples of this everywhere, dating back decades if not longer, and even if these relationships come with a heavy dose of friction (and even undisguised suspicion), they are necessary. They are necessary so that, when the only option left is to leave, there is nobody left behind. 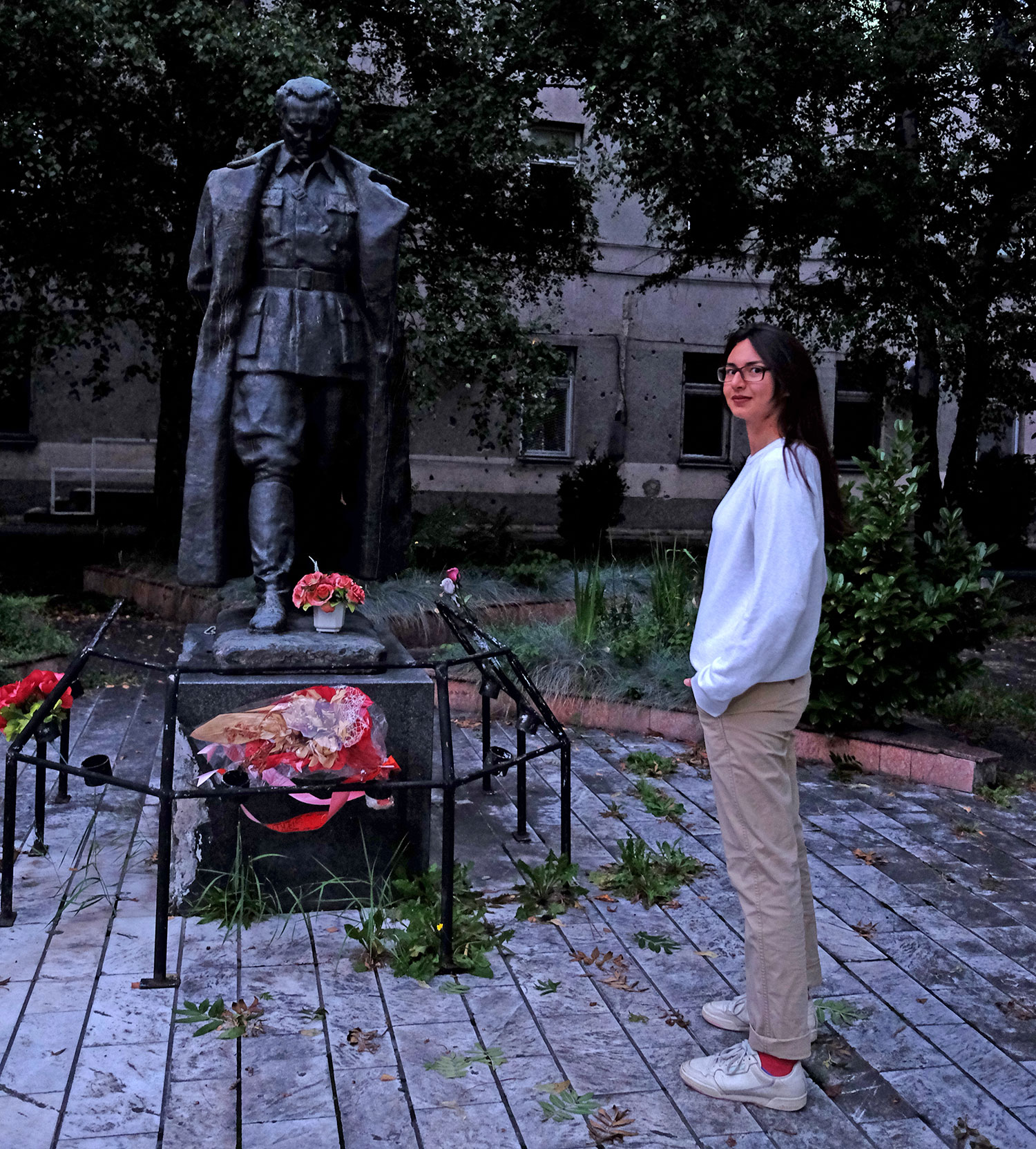 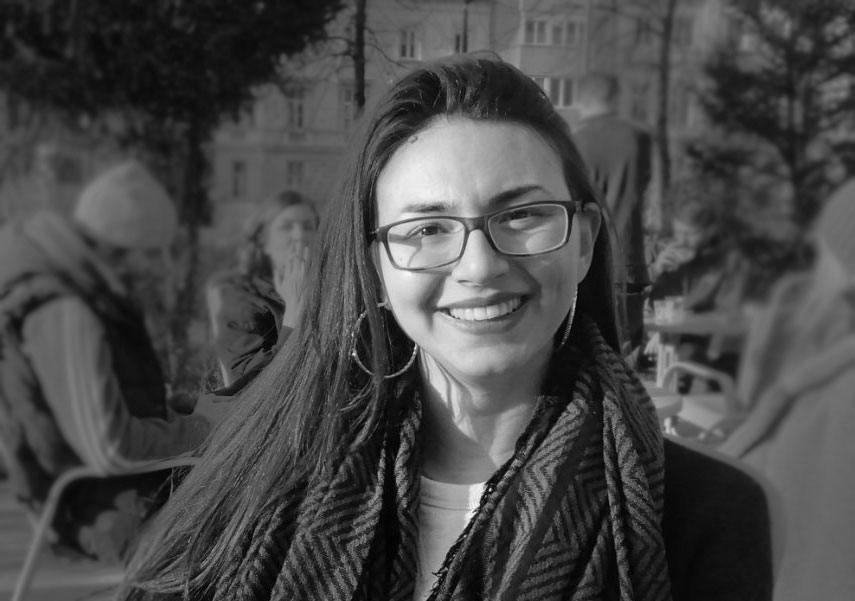 Hunadda is currently studying for her Masters in Conflict, Security and Development at King’s College London’s War Studies department.
Growing up and seeing wars play out in her countries of origin, she became increasingly fascinated by conflict and refugee situations. At the same time, after visiting the Western Balkans in 2017, she began learning Bosnian and delving into the region’s recent history and politics.  In addition to her ongoing collaboration with the Post-Conflict Research Center in Sarajevo, she has previously worked at the UNHCR in London in advocacy and communications, and as a cultural analyst in the private sector. Her work and study have taken her across the world but she is currently in London juggling projects alongside her studies, including a War Studies Student Research Fellowship.  Hunadda is the text editor for the Balkan Journey book.